What is the most popular OS or Windows vs Mac?

What is the most popular OS or Windows vs Mac?

Not long ago we wrote about the most popular browsers, now it is time to look at operation systems. So what the majority of the computers are running on?

Looking at the table below we can see that Microsoft is dominating. Different versions of Windows OS are installed on more than 70% of devices. Windows 7 is the most popular operating system at this point.

How did it change for the past few years and what can we expect in future?

Today’s leader, Windows 7, was installed on 55.9% of devices in 2013 . Windows 8 was released same year and that hit hard on Windows XP, as most of the new computers were sold with Windows 8preinstalled. So everyone who decided to buy a new computer or laptop were automatically switched to Windows 8. The result of Microsoft policy was even more significant in 2014. This allowed Bill and co. to shut down Windows XP support.

As we all  know, Microsoft released Windows 10 in the end of summer 2015. It is expected that this new OS will pull users from previous versions of Windows and in few month we will see how Windows 7 share slowly melts.

The main question is who is still using Vista?

NT vs Linux that is very interesting topic, especially after Microsoft announced their intention to release own Linux system. That means that Microsoft finally understood what is better for servers. We can expect NT to disappear from the chart soon.

Now let’s look at the most interesting part. We can clearly see that smart mobile devices (smartphones, tablets) are slowly taking over the world. In mid-2015 they already cover 5% of all the devices. But what is going on inside of those 5%? 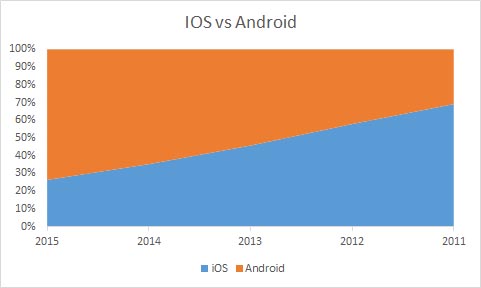 Unfortunately for Apple fans, Android is growing and gaining +10% of mobile market yearly. Windows Phone is not a player on the marker and managed to lose its positions if compared to 2014. Let’s see how these rates change at the end of the year.

What do Sony, HTC, Samsung, Razer have in common?

How to speed up your PC Part 1